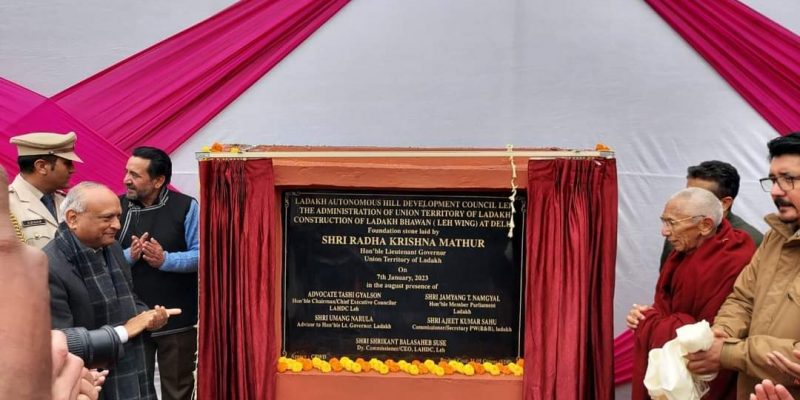 Leh, Jan 07: The foundation stone of Ladakh Bhawan (Leh Wing) was laid today at Dwarka in Delhi by the Lieutenant Governor of Ladakh, RK Mathur, in the presence of Chairman/CEC, Adv. Tashi Gyalson; His Eminence Thiksey Rinpoche and other distinguished guests.

Lt Governor Mathur appreciated all the political and official teams for their hard work in helping to realise the dream of Ladakh Bhawan and stated that the Bhawan would prove beneficial to students, pilgrims, and patients from Ladakh. He emphasised the need for Ladakh Bhawan to be constructed as a green building and stated that the Bhawan should be a special building energy-wise, with waste treatment facilities, so that it could become a good neighbour for the residents of Delhi. 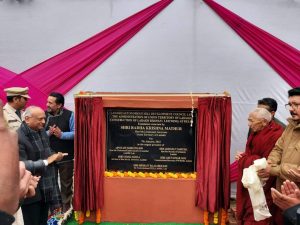 CEC Tashi Gyalson wished everyone on the New Year and appreciated the efforts and steps being taken for this project. Terming the project close to his heart, CEC Gyalson thanked LG Mathur and MP Ladakh Jamyang Tsering Namgyal for their major contribution in making this project possible. He also thanked senior and visionary leaders from Ladakh for their efforts in identifying and leasing out the land from DDA for the construction of Ladakh Bhawan.

Earlier, DC Leh Shrikant Suse welcomed all the guests and a consecration puja was also conducted at the site during the occasion.