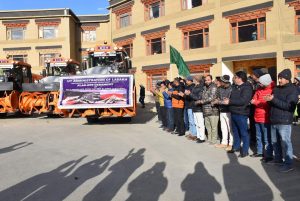 Later, while addressing the officers of the Mechanical Division Kargil, EC Naqvi thanked UT Administration and congratulated Mechanical Department for dedicating the machines which will fasten the opening of important passes of Kargil during winter.

He expressed hope that just like last year Kargil-Zanskar National Highway will remain open in winter this year as well and added that negotiations are going on with the UT Administration for the keeping Zojila pass open in winter as well.