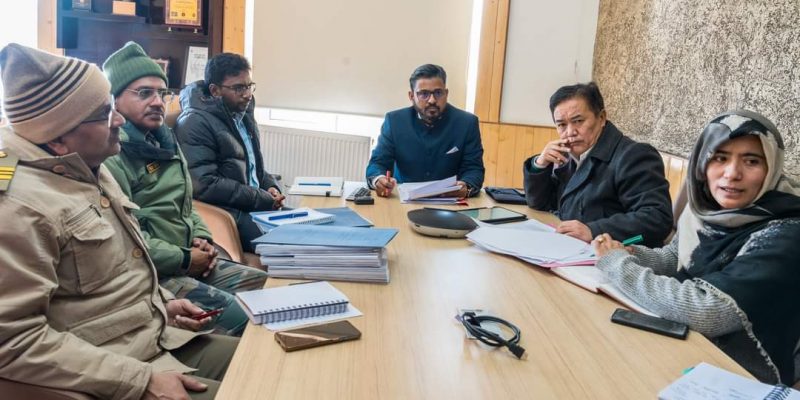 Major Road & Infrastructure Projects Being Rolled Out in Ladakh

Widening of roads, construction of bridges, installation of funicular systems and wayside amenities are being taken up.

Leh, December 10: Road infrastructure is one of the most crucial public assets, as it leads to economic and social development, and helps fight poverty by providing access to remote areas among others. Keeping these objectives in mind the UT administration is constructing major road projects in the border areas as well as roads and tunnels for improving internal connectivity.

The Commissioner/Secretary, PWD, Ajeet Kumar Sahu, reviewed the progress of work on the roads and infrastructure projects at the Civil Secretariat, Leh. He added that the administration should spare no efforts to ensure improving the connectivity.

While reviewing the progress on widening of the Kargil Zanskar Road Sh Sahu asked Deputy Commissioner Kargil for early completion of all pending issues concerning the acquisition of land for making an encumbrance-free corridor available to NHIDCL for working. He also asked SE Kargil and Executive Engineer Sankoo for early payment of work done liability of contractors on this road related to repairs and maintenance of the said road. CE mechanical apprised the meeting that sufficient manpower and machinery have been deployed on Kargil Zanskar Road for keeping the road open during the winter. He also apprised that newly imported high-capacity Snow Blowers would also be deployed on this road for efficient clearing of snow. It is pertinent to mention that the UT administration recently imported, 6 units of self-propelled snow cutter blowers for fast snow-clearing work at a cost of Rs. 22.20 crores.

M/S RITES who is preparing DPRS for tunnels of Namkila, Fotula, Hambotingla, Khardungla and Kela also briefed that the preliminary survey work and feasibility assessment have been completed on these tunnels. Sh Sahu asked them to get the technical vetting of these tunnels done by the BRO at an early date so that the proposal is presented to the higher authorities for consideration and approval.

The construction of Chushul-Dangti-Fukchey-Demchok (CDFD) was also discussed in the meeting. BRO authorities apprised that the construction of the CDFD road is important both strategically and from a tourism point of view. Sh Sahu asked the DC Leh to immediately constitute a committee to examine the proposal and submit his recommendations early for consideration and funding through MoRTH. He also asked DC Leh to provide land availability certificate for the proposed bypass roads connecting NH-1 and NH-3 from the northern and southern sides of NH to ease traffic congestion in Leh town. 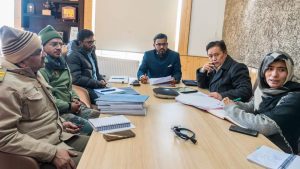 Further, the meeting also discussed the construction of major bridges across Ladakh. Sh Sahu asked both the DCs to send proposals of bridges, if any are required, in their districts along with full justification and cost-benefit analysis. He also asked all agencies to take up a few pilots for constructing bridges using Ultra High-Performance concrete to gauge its effectiveness.

He also asked CE Himank to early organise a workshop on modular and new technology for bridges and asked CE PWD Ladakh to provide all support to BRO to organise it.

Issues concerning the construction of the Zojila tunnel, its approach roads and related issues were also discussed. Reiterating the instructions of the Hon’ble Minister of RT&H in the recent meeting held in Delhi, Sh Sahu asked the NHIDCL and BRO to ensure the construction of avalanche protection sheds at all vulnerable locations on the national highway so that the tunnels and roads being constructed remain safe and can be used optimally.

Further, it was informed in the meeting that a Detailed Project Report is being prepared for the installation of a Funicular system in Ladakh. A funicular system is a suitable medium of public transport for hilly terrain and works well on steep slopes.

Sahu directed the concerned to ensure completing all the work in a time-bound manner to take the required action for implementing the directions of the Hon’ble Minister of RT&H and HLG in this regard.