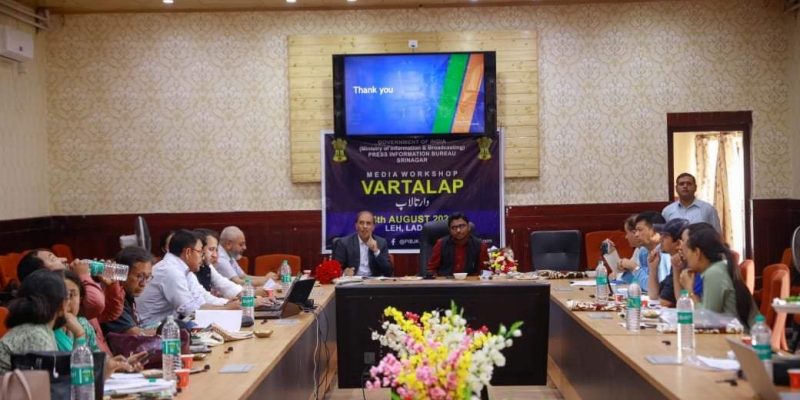 Leh, Aug 04: Press Information Bureau, Srinagar organised Vartalap, a one-day media workshop at DC Conference Hall. The objective of the workshop was to further strengthen the coordination between PIB and media to effectively communicate government policies, programmes and schemes to the people and strengthen its developmental agenda. Deputy Commissioner, Leh, Shrikant Balasaheb Suse was the chief guest for the event.

Additional Director General, PIB Srinagar, Rajinder Chaudhry, welcomed the media persons and called them ‘ears and eyes’ of the government due to the critical role played by the media persons in disseminating information through various mediums to the public. He informed that PIB has organised four such events in different parts of Jammu and Kashmir to sensitise local media about the development undertakings of the central government. He highlighted three major flagship schemes of the Government of India, including Ayushman Bharat Digital Mission, Mahatma Gandhi National Rural Employment Generation Act (MGNREGA) and Integrated Child Development Services (ICDS). 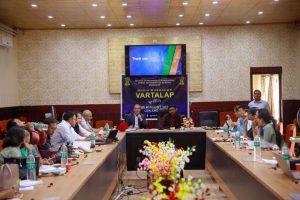 Deputy Commissioner, Leh, Shrikant Suse requested PIB to establish its permanent office in Leh. He also requested PIB to ensure that the initiatives undertaken by the central government and UT Administration are publicised widely and effectively so that everybody would avail the benefits of these schemes.

Dr Tundup Namgail, Assistant Director, Information Department, Leh thanked PIB for organising the event and informed that efforts would be made to provide exposure tours to media persons from Leh to enable them to learn from media persons from other states. He also requested media persons to highlight the initiatives taken by the central government, UT Administration and the Hill Council for the benefit of the people, especially those residing in remote areas of Ladakh.

Dr Phunchok Norboo, Director, Ayushman Bharat Digital Mission, Ladakh, gave a detailed presentation about the achievements of the scheme in Leh and its various components, including Ayushman Bharat Health Account (ABHA), etc. Similarly, Sonam Nilza, Child Development Project Officer (CDPO), Kharu, gave a presentation on the status and achievements in Leh. Majid Pandit from PIB Srinagar spoke on the importance of media convergence and the impact of social media on the authenticity of news and journalistic responsibilities.

There was also a question and answer after each session. Media persons from different organisations from Leh took part in the one-day workshop.