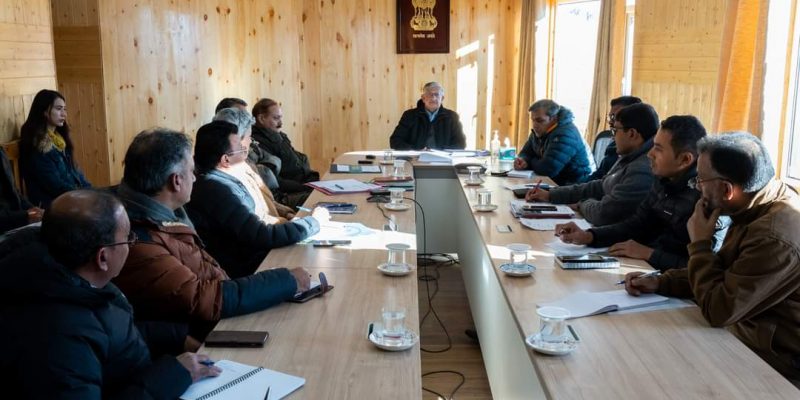 Leh, Dec 16: Advisor Ladakh, Umang Narula chaired a preparatory meeting for the G20 meeting to be held in Ladakh in April 2023. The G20, or Group of Twenty, is an intergovernmental forum of the world’s 20 major developed and developing economies, making it the premier forum for international economic cooperation. On December 1, India formally took over as G20 President. At the Bali summit last month, Indonesia transferred the G20 presidency to India in the presence of the Hon’ble Prime Minister, Narendra Modi. India will host over 200 meetings in over 50 cities across 32 different work streams.

At the outset of the meeting, Advisor Narula spoke on the priorities and significance of the G20 Summit for India and exhorted that the G2O meeting in Ladakh is a great opportunity for Ladakh to showcase its unique cultural and natural heritage which in turn shall be beneficial for the future branding of UT Ladakh. The Advisor also emphasized the key element of India’s G20 Presidency which is to take the G20 closer to the public and make it truly a ‘People’s G20’ through various ‘Jan Bhagidari’ initiatives which refer to the participation of people in governance at the local level. He added that the G20 forum aims to highlight inclusive growth and development, with women empowerment and representation being at the core of the G20 deliberations. To achieve that, Advisor Narula suggested careful planning of a Ladakh-centric narrative by promoting the unique and varied culture, cuisine, art, dance forms and by involving the youth, start-ups/entrepreneurs, etc.

The Divisional Commissioner, Ladakh, Saugat Biswas (Nodal Officer for G20) gave an elaborate presentation on the action plan for the hosting of the G20 delegation from 25th to 28th April 2023 (Tentative) which included security, beautification of roads, infrastructure upgradation, accommodation, excursions, manpower planning, installation of signages, display of ODOP products, and branding at airports, among others to ensure seamless planning and logistics for the event. 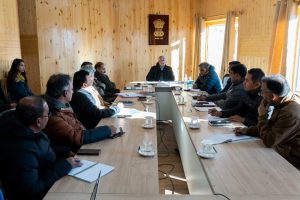 Principal Secretary, H&UDD, Ladakh, Sanjeev Khirwar stated that a wide range of programmes on Indian Presidency’s G20 themes viz. ‘Vasudhaiva Kutumbakam’ or ‘One Earth One Family One Future’, etc, shall commence in schools and colleges at the earliest.

On the ‘Vocal for Local’ aspect, Principal Secretary, Dr Pawan Kotwal suggested using local innovative products for souvenir items. He also stressed the importance of carbon neutrality and environmental friendliness in the choice of items used during the event and the use of e-vehicles for travel wherever possible.

In his concluding remarks, Advisor Narula exhorted that the age-old Indian tradition of ‘Atithi Devo Bhava’ should resonate in hosting the G20 gathering in Ladakh. Also, the Advisor instructed the concerned officials to form a Committee of Secretaries to oversee the preparations regularly and also put in place arrangements to comprehensively document the event through effective and focused media coverage.