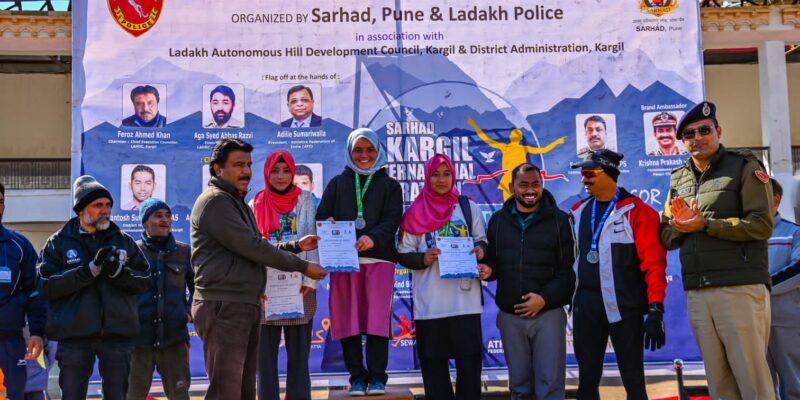 300 students both boys and girls from different educational institutions participated in the marathon with great enthusiasm which was held after a gap of two years. 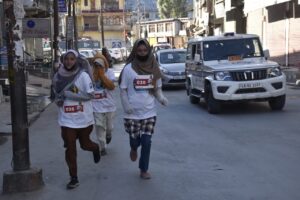 The Kargil International Marathon was organized by Sarhad NGO, Pune and Ladakh Police in collaboration with Ladakh Autonomous Hill Development Council Kargil and District Administration Kargil as part of the celebrations of Azadi Ka Amrit Mahotsav.

CEC Feroz Khan who was also the chief guest on the occasion congratulated the students for their participation in the event.

While appreciating the efforts of the organizers and all concerned departments for their pro-active support in the successful conduct of the Marathon, CEC Khan said the event will go a long way to promote sports activities and tourism in the district.

“Youth have immense potential and talent. We have requested the Sarhad NGO to conduct skill enhancement training programmes for students to help them excel in sports activities,” the CEC said.

He stated that the marathon should be a permanent feature in future saying that the LAHDC Kargil is always there to support such events.

The CEC announced that in coming years  the Kargil International Marathon will be held on 17th and 18th September keeping in mind weather conditions to promote sports activities in the district.He said such events are an opportunity for children to excel in physical training which will ultimately make them healthy physically and mentally and get them off from boredom.

Commissioner of Police Pimpri Chinchwad, Krishna Prakash R. Prasad personally trained the students from early morning and gave them instructions about exercise and physical fitness.He expressed gratitude to the LAHDC and District Administration for its cooperation for making the event successful and thanked students for their participation.

Deputy Commissioner and CEO, LAHDC, Kargil Santosh Sukhadeve expressed gratitude to the NGO Sarhad for organizing the marathon despite many challenges.

Meanwhile, the start and finish point of all races was the Khree Sultan Cho Sports Stadium Biamathang where after the Run For Unity all the participating students were facilitated for showing their performance in the marathon and were presented medals and certificates.

In 21 kilometers Half Marathon group, boys including Sadiq Ali, Ahmad Hussain and Mohd Jaffar got first, second and third position respectively. In the girls group Nilzaya Angmo got first position while Kaneez Fatima got second position.

Pertinently, all the necessary arrangements were made with different government departments at Khree Sultan Cho Sports Stadium Biamathang and other requisite locations to make the event successful.