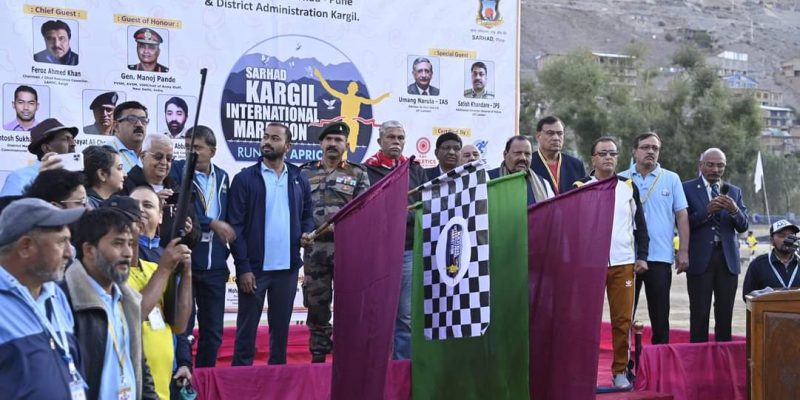 On the occasion, the CEC was the chief guest. The pre-recorded special message of Chief of Army Staff General, Manoj Pande was played on the occasion.

This year’s theme for the marathon was “Run for Apricot”. 1700 participants from Ladakh and across the country took part in race and made the event successful. 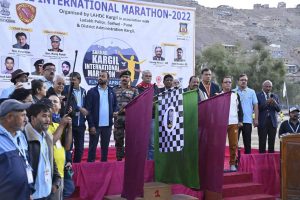 The 42 KM race commenced with the special message by Chief of the Army Staff and his representative Col. KK Venkat Rammana flagged off the 42 km race in presence of DC Santosh, family of martyrs Fatah Mohd, Zulfiqar Ali & Kargil Gaurav Awardee.

Similarly, the 10 km race, under men and women category, was flagged off by the advisor to LG in presence of CEC Kargil, Sanjay Nahar, Ajay Jhajhad and Kargil Gaurav Awardees.

Secretary YS&S UT Ladakh Ravinder Kumar Dangi flagged off Half Marathon of 21 km (both men and women) in presence of DC Kargil.

Meanwhile, the start and finish point of all races was the Khree Sultan Cho Sports Stadium Biamathang where participations were appreciated for showing their performance in the marathon and were felicitated with medals and certificates.

In the 21 km race, in male category, the position holders under the age group of below 40 years are Vilayat Ali, Khadim Hussain and Manzoor Hussain. While the female position holders in the same are Tashi Ladol, Stanzin Chondol and Stanzin Dolker.

Pertinently, all the necessary arrangements were made with different government departments at the Biamathang stadium and other requisite locations to make the event successful.

Last year, the marathon was held on October 31, however, this year the event was held a month before. The event is aimed to promote sports activities in the district and such events are an opportunity for children to excel in physical training which will ultimately make them healthy physically and mentally and get them off from boredom.