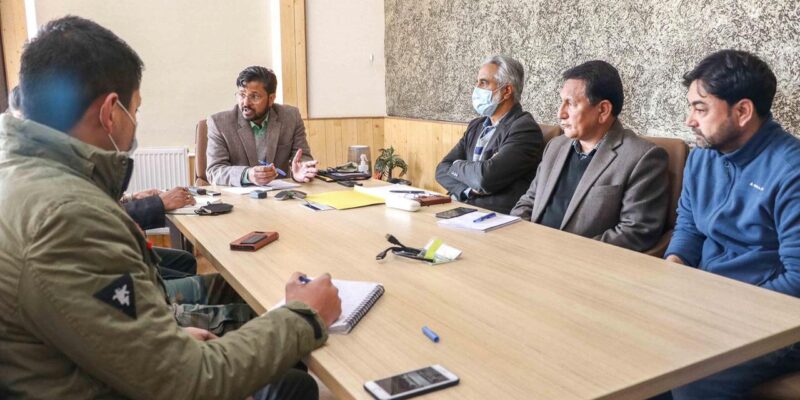 Commissioner Secretary, Sahu directed teams from NHIDCL and PWD to conduct a joint visit and decide on deployment of manpower and machineries by identifying the vulnerable spots as per previous years experiences and feedback of locals. All such deployment should be fully equipped (food, Pol, K.Oil, winter uniforms, communication devices etc.) to remain deployed throughout the winters. He directed the concerned officials, wherever possible to keep the Helipads functional for emergency evacuation in case of any emergency.

He stressed that there should be no room for any communication gap thus NHIDCL to coordinate with all the agencies (Army/Police) present enroute Kargil-Zanskar highway and to keep them on board. Emphasizing, the priority of keeping roads open to the maximum duration, he directed concerned officials to hire local operators to operate JCB’s and Bulldozers for snow clearance work on Kargil-Zanskar road as they are well verse to the area and equipped with knowledge to operate equipment in extreme weather conditions. He also asked that proper facilities in terms of food, lodging and uniform should be provided to the workers.

Simultaneously, he directed the concerned Departments to make a detailed SOP on internal roads as well. He stressed that the administration fully supports the concerned departments and asked them to work in coordination as per SoP.

Regarding Zojila axis, Sahu informed that recovery vehicles, dumpers and JCBs have been deployed. Also, informed that by the end of November, four more recovery vehicles and two snow cutters for Zojila clearance will be added to the contingent. Sh Sahu assured to BRO and NHIDCL for full support of UT Administration wherever required.

He also directed the concerned officials to establish a joint control room in Kargil for coordination with BRO, NHIDCL and Army on the Zojila axis and Kargil-Zanskar road.

Earlier, the concerned Departments apprised Commissioner Secretary on the work being done on these roads for winter preparedness. They also shared the issues and challenges faced by them. A detailed discussion took place on Leh-Manali road as well.