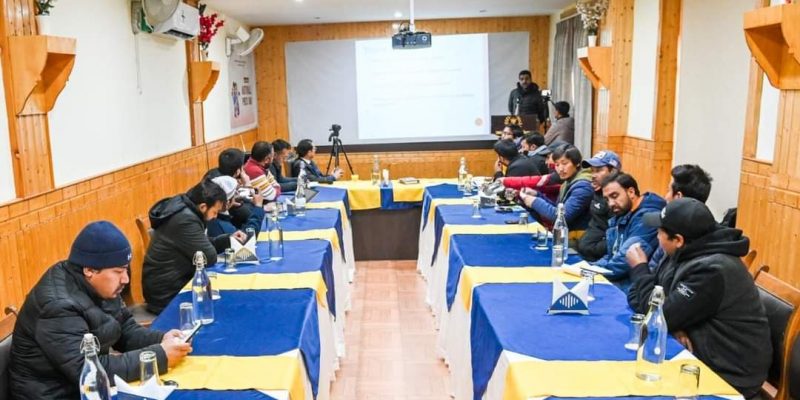 On the occasion, the Joint Director Information congratulated people and the media fraternity on the National Press Day and appreciated the role of media in highlighting public issues in the border district.

Kacho said media needs to play a responsible role to aware people of UT Ladakh about policies and schemes formulated by the Union Government and the UT Administration.

He said the local media organizations of Ladakh should highlight the developmental works done by the LAHDC Kargil and UT Administration since the formation of UT Ladakh in order to make people aware about the growth and development.

While highlighting the role of DIPR Kargil, he said the information department acts as bridge between government and people.

The Joint Director appreciated the information department in playing a pivotal role in covering different aspects of governance in the district with commitment and dedication.

“There is a great paradigm shift in the work progress of DIPR Kargil with the help of employees and officials. Though there is manpower crunch but we are doing our best to take the department to new heights,” he said.

While talking about fake news atmosphere in the global, national and local media, Kacho said that media should be aware of the fake news and try to refrain from providing any kind of misinformation in the age of information superhighway.

He said journalist needs to refrain from forwarding fake WhatsApp messages on social media and advised them to be cautious and practice responsible journalism.

President Press Club of Kargil, Hussain Khaloo highlighted the role of the media in covering the public issues in entire Ladakh region and in Kargil district.

He requested the Joint Director Information to officially handover the Press Club Kargil office to its members. He also requested that reporters should be provided transport facility for inaccessible and far off areas for reporting purpose.

Khaloo thanked the LAHDC Kargil for approving a media tour to Pune for the local journalists of Kargil district.

Mansoor also informed the participants about number of fact-checking tools for videos and pictures. He suggested journalists to use social media wisely in order to curb the spread of fake news.

On the occasion, a panel discussion was also held in which Nasir-ud-din-Khafi, Syed Hasim, Anwar Tsarpa, Murtaza Fazili and Muhammad Ishaq participated. They discussed several issues and challenges being faced by the media persons of Ladakh in general and Kargil in particular. They also discussed the current scenario of print, electronic media and new media in the region.

Earlier, Murtaza Fazili of DIPR Kargil presented welcome address and highlighted the importance of National Press Day. He also highlighted the role of media in serving the interest of the general public in the country. He conducted the programme’s proceedings and presented the vote of thanks.

The National Press Day is observed on November 16 every year across the country as a day to commemorate the formal beginning of operation s of the Press Council of India, a statutory and quasi-judicial establishment.