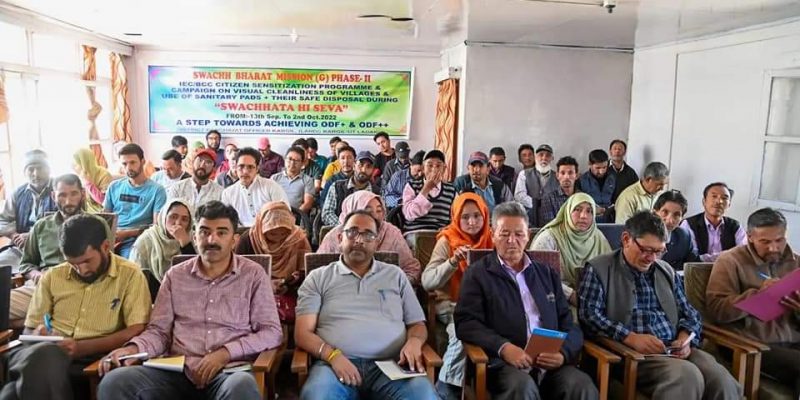 During the program, the Director RD&PRD said that the UT Administration is committed to reach out every village across Ladakh to ensure sanitation and cleanliness.

The director also directed that at places where the segregation sheds are to be constructed, buildings should be identified till the construction of permanent shed is completed. 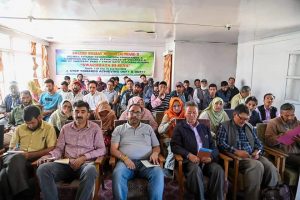 He also said that during the campaign, cleanliness drives should be held at vulnerable places, generate greater public participation and reinforce the concept of sanitation.

The capacity-building program was aimed to impart training to BDOs, Sarpanches, Panchayat Secretaries, CIC operators so that they impart the same to the villagers.

During the sensitization program, they were given training awareness on visual cleanliness of villages and use of sanitary pads and their safe disposal.

Speaking on the occasion the officials said cleanliness is the responsibility of all stakeholders and under Swachh Bharat Mission Grameen’s 2nd phase, the department is trying to ensure proper cleanliness and the least usage of plastic.

While informing about the activities of the department, the DPO said that efforts are being made for effective solid and liquid waste management in the district.

The DPO gave training about solid waste management and appealed to people to maintain cleanliness around their surroundings. She also informed about interventions in achieving the goals of Swachh Bharat Mission Grameen phase-II.

The RD&PRD has scheduled a campaign (indicative) on visual cleanliness of villages during “Swachhta Hi Seva” (SHS) from September 15 to October 02, 2022 to be held in all Panchayats of Kargil district.

Cleaning of garbage vulnerable sites in the villages will be held from September 15 to 16.

Community awareness for the segregation of waste (dry and wet) at the source will be held from September 20 to 21.

Keeping the areas near water bodies clean and doing tree plantation around them to be held from September 22 to 23.

Aware people about ill effects of Single Use Plastics (SUP) by organizing Gram Sabha meetings and pass resolutions to ban SUPs to be held from September 25 to 26.

Sarpanch Sanvads on ODF plus elements to be held from September 27 to 28.

Cleanliness drive, sensitization on the use of sanitary pads, its safe disposal and Gram Sabha to be held on October 2nd.