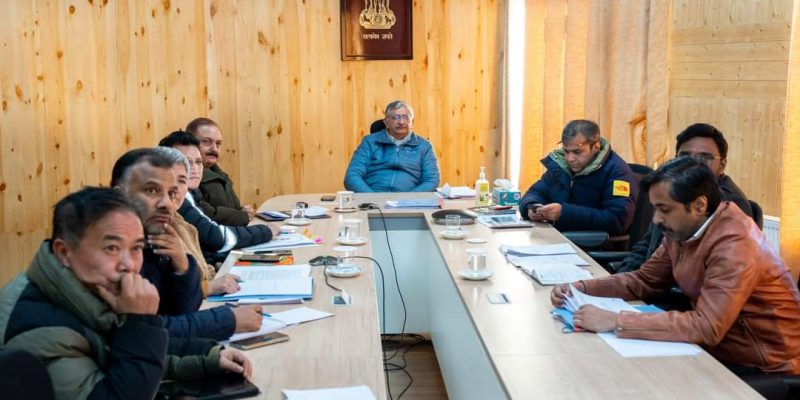 Leh, Dec 22: Advisor Ladakh, Umang Narula reviewed the implementation of provisions of the Rights of Persons with Disabilities Act 2016 in Ladakh and progress made in making Ladakh disabled-friendly.

Advisor Narula emphasised that all upcoming Government buildings shall meet the accessibility standards as per the ‘Harmonised Guidelines and Space Standards for Barrier-Free Built Environment for Persons with Disabilities and Elderly Persons’ issued by the Government of India, in March 2016. He also directed that the existing government buildings should be retrofitted with ramp at the entrance and an accessible toilet to meet the basic accessibility standard. He directed all Administrative Secretaries to review the accessibility audit report prepared by the District Administration and earmark funds for making public buildings and spaces accessible for persons with disabilities.

Advisor Narula stressed on ensuring accessibility, especially in schools, and stated that a thorough review must be done of such requirements in schools. It was put forth during the meeting that an accessible model school may be developed with the help of experts, to be replicated further.

While reviewing the status of coverage of Unique Disability ID (UDID) for PwDs, Advisor Narula directed the Deputy Commissioner and the Health Department for 100% UDID coverage for all Persons with Disabilities within the next month through special camps.

Advisor Narula also said that a District Disability Rehabilitation center should be established in both districts for providing comprehensive rehabilitation services to PWDs at the grass root level. Deputy Commissioners were asked to identify suitable NGOs who can run the DDRC and the Department of Social Welfare and Department of Health were asked to extend requisite support to the district in terms of funding and health professionals.

Principal Secretary, Dr. Pawan Kotwal while briefing on the action taken by Health Department said that Persons with Disabilities can avail specialized medical services in hospitals outside Ladakh under the PMJAY. He said Department will try to have linkages between Health Card and UDID so that health services can be better facilitated to the PwDs. 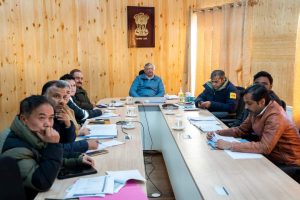 Principal Secretary, Sanjeev Khirwar stated that accessibility standards were incorporated in the draft Housing & Building Bye-laws and that all new public buildings in Municipal area will have to strictly follow the prescribed accessibility standard. He also stated that necessary steps have been taken up to make government websites accessible as per the specified guidelines.

Commissioner/Secretary Padma Angmo stated that the Disability Rules had been formulated and submitted to the Government of India for approval before it is notified in the UT of Ladakh. She stated that a draft ‘Action Plan for Empowerment of persons with Disabilities 2022-27’ has been prepared in consultation with NGOs and Departments and shared with Administrative Secretaries for chalking out department-specific detailed action plans and deliverables with timelines. She also stated that skill development schemes for PwDs are being formulated.

Deputy Commissioner Leh, Shrikant Suse, and Deputy Commissioner Kargil, Santosh Sukhdeve briefed about the UDID camps held and the accessibility audit carried out in the respective districts. Chief Engineer, PWD, Tashi Chombel presented the accessibility audit report prepared by the Department and said that ramps at the entrance for all public buildings can be constructed in a time-bound manner.

Discussions were also held on developing disabled-friendly public transport systems, formulation of new scheme for persons with benchmark disabilities to cater to their education and other special needs.