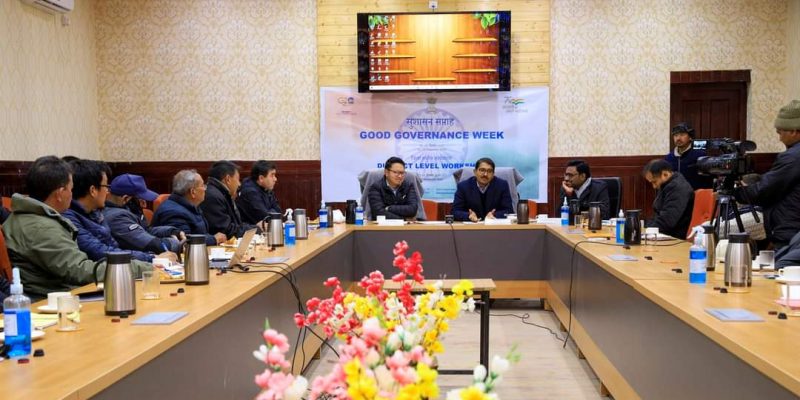 At the outset of the programme, DC Leh briefed about the various activities/camps organized under Good Governance Week in different villages in association with all the line departments to redress public grievances and to strengthen and deliver public services at the doorstep. He informed that in the four days of GGW from Dec 19-22 around 1240 public services were delivered during good governance camps organized at 34 different locations in the district.

Addressing the gathering, Commissioner Secretary, RDD, Saugat Biswas, said that the nationwide observation of Good Governance Week implies the inherent scope and potential to further improve governance. he said that apart from institutional structure of any government, various other stakeholders such as private sectors, civil societies, NGO, structure, and elements of society also play an important role in governance and to effectively and efficiently steer public service delivery.

He added that accessibility and responsiveness are essential principles to ensure good governance and shared that government servants are provided the opportunity to serve the public. He urged all the departments to accord all possible support, given their executive powers, to the public representatives to enable and promote participative and consultative governance. Stressing the significance of transparency and accountability under good governance, Comm Secretary Biswas said that subjectivity should be reduced from any decisions and the rules and regulations set by the government should be respected and the public servants should work within that ambit. 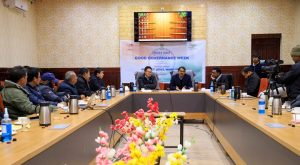 Further, Comm Secretary Biswas laid stress on ‘reengineering of the processes’ to ensure that the services are provided to the public effectively, timely, and efficiently.

Speaking on the occasion, Executive Councillor, Stanzin Chosphel stressed ensuring that all the government/departmental services are simplified and public-friendly, reducing the cumbersome processes/procedures to avail of the benefits. He added that the public delivery system should be strengthened by making the schemes/services public-oriented, easy and systematic without the hassle of making rounds of the offices.

Adding that public participation is an essential feature of good governance, EC Chosphel shared that an effective and efficient Gram Sabha could resolve many issues at the ground level itself. He urged the District Administration to strengthen gram sabhas by ensuring the participation of the stakeholders, including the district officers.

EC Chosphel lauded the initiative of the UT Administration in establishing Common Service Centers in all the villages of Ladakh as a way forward for promoting transparency and accountability by providing digital services to the public.

Earlier, ACR Leh delivered the message/feedback from former Chief Secretary, J&K / Former DC Leh, C Phuntsog on the Vision document of District@2047. The feedback highlighted the reigning challenges to governance in Ladakh and the steps required in the governing mechanism of Ladakh to address these challenges.

During the dissemination workshop, three best good governance practices and initiatives taken by the district were also presented in detail by screening documentaries and power-point presentations.

These initiatives include 24×7 water supply in Gangles and JJM by the Public Health Engineering Department; Solid Waste Resource Management (Project Tsangda) under Swachh Bharat Mission Grameen by the Rural Development Department and Ladakh Greenhouse Project by the Agriculture Department.