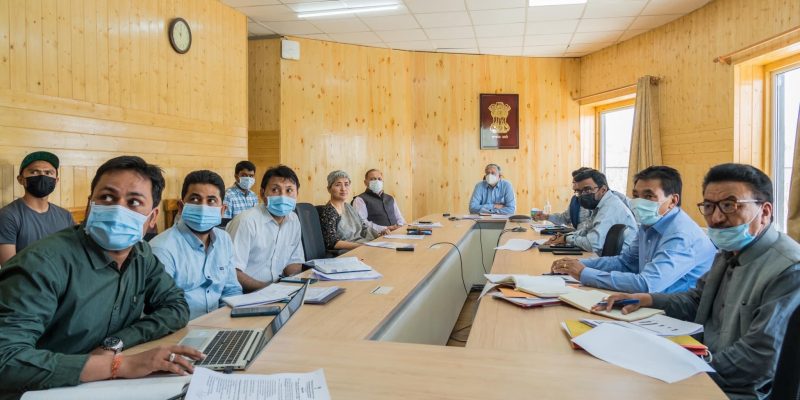 Parekh Shukla, Water Quality Expert, JJMPMU presented data on the Target and Physical Progress of Functional Household Tap Connections (FHTCs) coverage across various blocks and villages in Ladakh. He apprised the Advisor of the status of providing piped water supply to schools, Anganwadi centers, and other public institutions; Greywater Management; Operation and Maintenance Plan; among others.

The Advisor was apprised by Commissioner Secretary, AK Sahu that skill development and capacity-building training will be provided to identified villagers to develop the capacity of the Operational and Maintenance workforce. Also, JJM Ladakh Grievances Redressal Mechanism and Portal have also been launched for the public to lodge their grievances related to JJM Scheme.

Advisor Ladakh directed to accord top priority to Har Ghar Jal certification and providing piped water supply to schools, Anganwadi, and stressed achieving the target as soon as possible. Commissioner Secretary, AK Sahu, and DC, Leh were directed to monitor the progress of work regularly. He stressed that work needs to be expedited and reviewed continuously.

The Advisor also directed the JJM team to devise strategies to increase community participation and generate greater awareness of the projects through films and documentaries.

The Advisor also directed the concerned officials from Kargil to organise Block Level meetings. He also emphasised on Jan Bhagidari to make the entire project planning and implementation process open to the general public who will be the ultimate beneficiaries of the projects.

Director, Rural Development Department apprised the Advisor that soak-pits are being created for each household to ensure its effective management.

The Advisor urged all the concerned officials and representatives involved to work with a serious sense of responsibility to ensure the implementation of the scheme within the fixed timeframe.