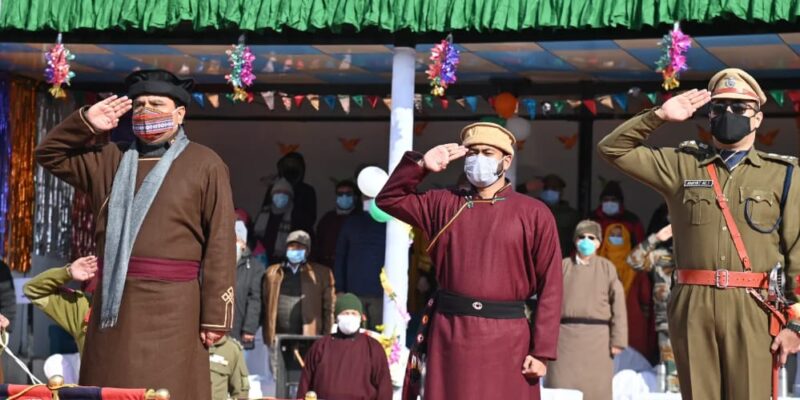 At the stadium, the CEC took salute at an impressive march past by the contingents of Ladakh Police, police band party NCC Cadets in presence of district officers. 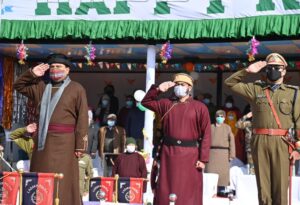 While congratulating the people on Republic Day, CEC Khan recalled the contributions of the makers of the Indian Constitution and the supreme sacrifices of national heroes who laid down their lives for the country.

He hailed the services of the Army, paramilitary forces and police in guarding the frontiers in harsh conditions and for maintaining peace, order and internal security in the country.

Speaking on the occasion, Khan said our leaders sacrificed their lives for future of the nation and made India a democratic country.

“The biggest tribute to them is that if we can work on the principles of peace and justice for the development of the country,” he said.

Khan said we should take pledge that we all will do our best for the prosperity of the country and it begins from villages, to districts and to country.

On the occasion, CEC congratulated Akhon Asgar Ali Basharat who has been honored with Padma Shri award in the field of education and literature.

While highlighting the achievements, development activities and future plans in the district, the CEC said that LAHDC Kargil is fully committed towards the overall development of the district in all sectors and in this regard several important initiatives have been taken up.

He also informed that under Ladakh Autonomous Hill Development Council (LAHDC) Kargil, several developmental measures have been taken in many departments like health, PWD, Tourism, Sports, Rural Development and various works are undergoing in these departments.

Khan also congratulated the students who have recently cracked JEE, NEET and other national-level competitive examinations.

He said the education sector was affected by the Covid-19 pandemic and despite that the educational activities continued in the district with every possible measure.

CEC said in the beginning of Covid-19 pandemic, radio, TV and social media were used as medium of education and special education programs were organized for students.

Khan informed that ICT labs, smart classes have been established in 54 government schools in order to impart quality education to the students.

He said apart from that 8,650 free tablets were distributed among students of 7th to 12th classes to help them attend the online classes, which created a positive impact.

He said classes were started in 488 villages/Mohallas in which 2,119 volunteers and 1,810 teachers imparted education to students. The CEC said under the same, 18,673 students were benefitted from the community classes.

He said that education has been a top priority of LAHDC Kargil during the Covid-19 pandemic and Rs 2 Crores has been allotted for winter tuition for Kargil adding that winter tuition has been started in 150 centres in the district. He said for the convenience of students, 6 buses were bought under SDP scheme.

Khan said they are constantly monitoring the Covid-19 and have fast-tracked the vaccination drive for students of 15-18 years of age.

He said health is always a priority of LAHDC, Kargil and in this regard, Covid-19 vaccination for children from 15-18 was also started in to help fight the spread of Ciovid-19.

CEC said doctors, paramedical, staff, frontlines workers and people above 60 years of age have been inoculated the booster doses of vaccine.

He said to provide quality health care services to patients, 6 critical care and 17 transport ambulances have been kept available at different places.

CEC said in view of third Covid-19 wave they have planted 6 oxygen plants in the district having an oxygen generation capacity of 100-1000 LPM.

He also appreciated health workers including doctors and paramedical staff and frontline line workers, employees deputed at different screening points who have done tremendous job in the mitigation of Covid-19 in the district.

CEC said under PWD CRF the construction work of roads at the cost of Rs 120 crore is undergoing in the district, while under PMGSY Rs 220 crores has been sanctioned for 23 new schemes on which work has been started.

He also said that a total Rs 50 crore and 43 lakhs has been spent on 23 various road construction works, and under SDP scheme 21 new bridges are at the completion stage.

Similarly, Rs 15 crores and 39 lakhs has been spent on the construction of bridges at places of the district including Thuluspursa, Padum, Lugnak, Parichumik, Akhchamal and Karkitchu and work has been completed.

CEC Kargil said Rs 29 crores has been spent on macadamization of 48 kilometer long roads and the work has been completed.

He also said in the interiors of the district, complete macadamization of roads has been achieved.

Regarding Kargil-Zanskar national highway (NH 301), CEC said the construction work of road widening is going on at war-footing basis for which Rs 800 crores has been sanctioned.

In order to provide clean drinking water to every household of the district under Jal Jeevan Mission (JJM), PHE Department has got Rs 350 crores. Till date 145 functional household taps have been provided at different places. As of now Rs 31 crores has been spent on the same scheme.

Khan also said In view of the increasing demand of passengers and patients in Srinagar, we have also started construction work on an additional block at a cost of Rs 8crore.

The construction of which will provide additional accommodation to travelers, students and patients.

CEC further said most of the population of Kargil is engaged in agriculture and allied sectors and these sectors are an important source of income.

In this regard, he said the council has taken many pragmatic steps towards the development of these sectors.

In addition to the development of agriculture and allied sectors, through subsidy scheme at the cost of 25 crores farmer were provided dryer and polder units, high quality of ram and goat units also they have been provided the necessary equipment to build greenhouses to increase the production of fresh vegetables, especially During winters.

CEC said LAHDC Kargil has strived to provide better marketing facility to the fresh fruits of the district especially apricot.

He said despite harsh winter and extreme cold at Zojila tunnel, construction work at tunnel is going on in full swing at both sides of the tunnel.

CEC informed that from Spangla side, 910 meters and from the Sonamarg side around 600 meters of tunnel construction work has been completed.

Khan thanked the Central Government and the Ministry of Road Transport and Highways for their continuous support. He also extended gratitude to workers, operators and engineers working on both sides of the tunnel.

Regarding unemployment, CEC said every effort will be made to fill the vacancies in various government departments and this process will start soon.

He said that unemployed youth will be provided better employment opportunities in various departments.

Khan said recently 53 vacant posts of Account Assistant have been filled and this recruitment is the example of transparent recruitment process.

He thanked employees of the Employment Department, especially Deputy Commissioner Kargil, for completing this recruitment process in a time-bound manner.

Apart from this, he Khan said that the council is planning to provide financial assistance to BPL class students preparing for various competitive examinations so that monetary issues would not become hindrance to achieve their goals.

In his address he said the UT Administration and LAHDC Kargil have developed 7 helipads at various locations including Kargil, Drass, Sapi, Haneskot, Chiktan, Silmo and Meenamarg at the cost of Rs 4 crore and 90 lakhs. He added that successful trail landings have been conducted done in these helipads.

CEC said with the development of these helipads, the air connectivity will boost in the district which will also help the locals especially patients during the winter season.

Khan said they have signed a Memorandum of Understanding (MoU) with the Government of Sikkim to promote use of organic farming techniques to enable farmers to reap the environmental and economic benefits.

In order to push winter sports for international standards, he said Ice Hockey Ring at a cost of Rs 37 crores has been developed at Kurbathang and the construction be completed soon.

CEC said construction work of Synthetic Track and Astro Turf at the cost of Rs 18 crores is going in full swing. Apart from this he said indoor sports facilities, football ground will also be provided by the Sports Council of India.

Khan said the council congratulates all the athletes of the district who have made Kargil proud by winning prizes and medals at home and abroad.

He also congratulated Shahnaz Parveen and Farzana Batool for representing the country at Asian Sikh Games 2021 and winning gold and bronze medals respectively.

On behalf of Hill Council Kargil, Khan thanked the UT administration, especially the Lieutenant Governor Ladakh, RK Mathur for his support and cooperation for the overall development of Kargil district.

CEC also thanked Executive Councillors, Councillors for their hard work, cooperation that has enabled the speedy completion of development activities.

Khan also extended his gratitude to PRI Members who have been playing a vital role in the development of the district at peripheries.

He also thanked the media fraternity including print and electronic media for playing an active role in highlighting the developmental works and various schemes among the masses.

CEC appealed the media to understand their duty and refrain from spreading false and negative news.

In his concluding remarks, he urged the people of Kargil including religious, political and social organizations to extend their support in making the district a developed district.

Later, CEC and other dignitaries distributed mementos and certificates among employees of various departments, meritorious students, and members of NGOs, volunteers, individuals for their extraordinary performances and contribution for public welfare. On the occasion, prizes were also distributed among the participants of the march past and cultural programs. 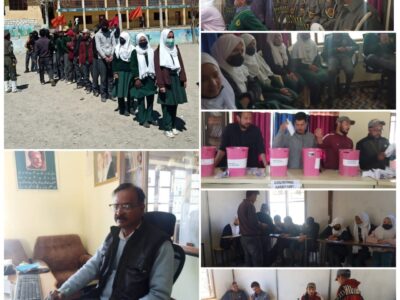 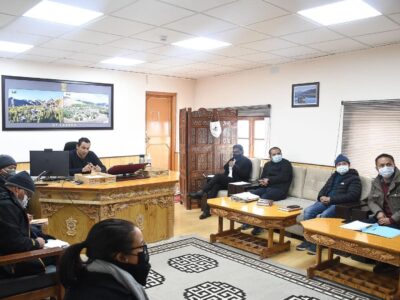 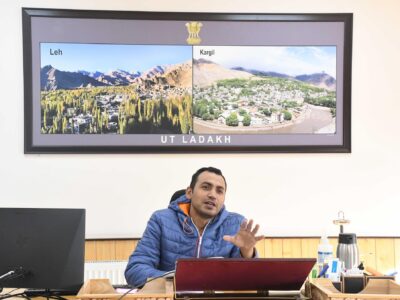