During the event live telecast of 26th Edition of National Youth Festival inauguration by Prime Minister Narendra Modi from Karnataka was also screened. The participants gave a patient hearing to the Prime Minister’s address for the country’s youth. 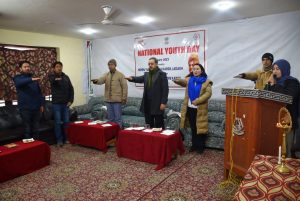 The Acting CEC said Swami Vivekananda’s life was full of inspiration and asked the students and the youth to take his life as an inspiration. He also urged youth to work hard to compete with challenges of the modern age and take the Nation to new heights.

Tashi also said that LAHDC, Kargil is committed to provide every possible support for youth and hoped that the event will prove beneficial and inspire participants.

The Acting CEC appreciated the NYK Kargil for organizing such events adding that the NYK is rendering their services for the youth.

On the occasion, Joint Director Information Ladakh, Imteeaz Kacho described the life of Swami Vivekananda and said that Vivekananda has taken the culture of India to the international level.

The DYSSO Kargil, Aabid Ali congratulated the youth on National Youth Day. He also talked about the role and responsibilities of youth towards nation building adding that youth need to come forward to take the Nation to new heights.

On the occasion, the District Youth Officer, Jagmat Speldon advised the youth to actively participate in such programs to gain experience and not to miss the opportunities. At the event, students presented special lectures on life and teachings of Swami Vivekananda.

The National Youth Day, also known as Swami Vivekananda Jayanti, is celebrated in India on January 12 to commemorate birth anniversary of Swami Vivekananda, one of India’s most influential spiritual leaders and thinkers.