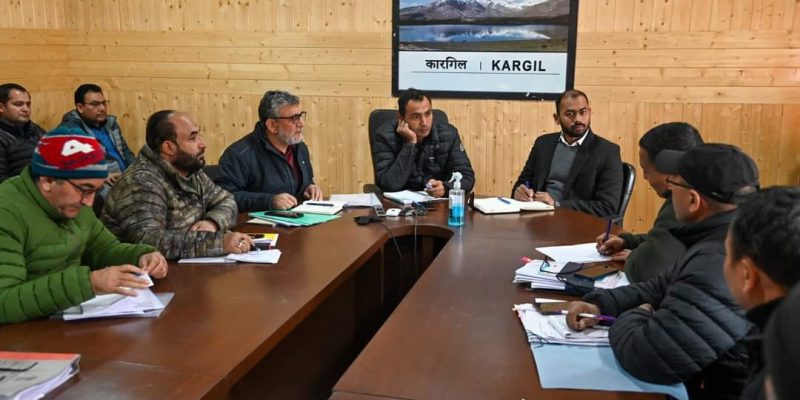 During the meeting, threadbare discussions and deliberation were held regarding developmental works being executed in the district with the officials of concerned departments in presence of DC Kargil.

The Secretary took a review of winter stocking in the district and its far-off areas and instructed the officials for 100 percent stocking before November end.

He took a random inspection regarding the work progress of various development projects in the district and directed to expedite the pace and ensure to complete the works before November end.

The Secretary said that inefficiency in work progress wouldn’t be tolerated and if anyone is found doing so the concerned executing agency will be blacklisted.

Secretary Kumar, in presence of DC Kargil, directed the concerned district officials to focus on major activities before snowfall and create success stories in the district.

Later, he visited Goma village and inspected the ongoing work of playground and Indore Stadium sanctioned under SDP and district Capex respectively.

He directed for the tendering process of the construction works which are in the plan and assured all possible help. 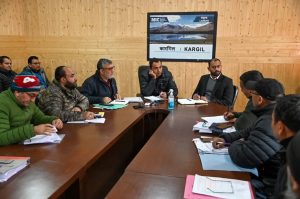 During the visit to Kurbathang, the Secretary inspected the construction work of Green House constructed by the Agriculture Department and appreciated the outcome in terms of vegetable production.

He instructed the officials of the department to cultivate the surrounding area and use entrepreneurs. He directed them to install the temperature meter and record the optimum temperature inside the Green House.

The Secretary also inspected quality of various kinds of seeds distributed on subsidy rates to the people of Kargil. The Secretary directed the Agriculture Department for publicity of these seeds and its availability.

While inspecting the work progress of Animal Husbandry Department, the Secretary was informed about the construction of cow shed which is completed and executed under District Capex.

He also inspected the functioning of Liquid Nitrogen Plant which was inaugurated by Lieutenant Governor Ladakh virtually and appreciated the work done by the concerned department.

During the visit to 66/11 KV power grid sub-station Kurbathang, Secretary Kumar inspected its ongoing construction work and directed to complete it within 10 days.

He directed to hire more labourers and ensure its functioning within the stipulated time. While inspecting the outcome of installation of the sub-station, the Secretary was informed that it will reduce load from main Power Grid Station and add power availability.

He directed the officials of the concerned department to construct the seating arrangements around the ground besides changing room and VIP block. Regarding the Ice Hockey Rink, Secretary Kumar directed to speed up the progress.