Leh, December 27: The UT Ladakh Haj Committee unanimously appointed Sh. Mohd. Ali Majaz of Choskore, Kargil as the Chairperson of UT Ladakh Haj committee in Leh today. The meeting was held in the presence of the Hon’ble Member of Parliament, Ladakh, Sh. Jamyang Tsering Namgyal, and the newly appointed members of the Haj committee.

MP Ladakh on behalf of the committee offered traditional Ladakhi Khataks to the newly elected Chairperson and wished him success for leadership to the Haj Committee.

Speaking on the occasion, Mohd. Ali Majaz expressed his gratitude to the members present for placing their trust in him and electing him Chairperson. He hoped to serve together as a team in the best possible way. 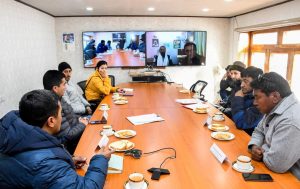 In the meeting, MP Ladakh stressed the need of setting up a Haj committee office in Ladakh on an immediate basis.

It was informed that the main office (HQ) will be setup in Kargil district. Detailed discussions also took place on having a quota for Haj pilgrims from UT Ladakh; notification of specified online application process for Haj pilgrims; grievance redressal system for the public; providing excellent quality of service to the pilgrims; establishment of office for Haj Committee and setting up a separate Haj House in Leh district.