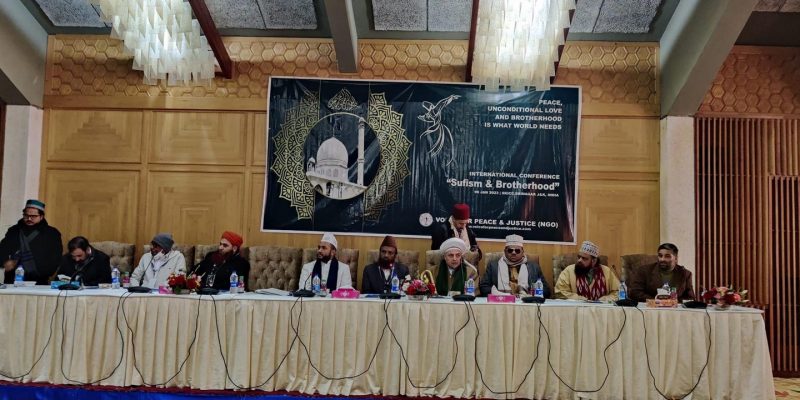 Kashmir is the place of Sufis who always teaches the path of peace and prosperity along with brotherhood.

This was stated by scholars from different countries who participated in the first ever International Conference Sufisim and Brotherhood organised by Voice for Peace and Justice, NGO at SKICC Srinagar.

Sheikh Muhammed Eşref Efendi from Germeny Grandsheikh of the Naqshbandi silsila, was the Chief Guest on this occasion.

Speakers threw light on the core motive of Islam that is peace and harmony and Sufisim is the light for developing brotherhood and harmony in the society.

Mohammad Sadiq Hardassi Historain and Author from Kargil Ladakh also participated in the International Conference and talked about the Sufi preachers who travelled all along these tough terrains of Ladakh and Baltistan to spread the message of Islam and Brotherhood.

He said that it’s these saints that brought a culture and tradition along with Architecture, Agriculture Practice and Social Practice as well as preaching the religion of peace and harmony Islam even without shedding a single drop of Blood.

Sadiq Hardassi further added that there is still scope of research and study in this field and he along with his Team has discovered two important shrines of Islamic Preachers (Sufi Saints) who preached Islam in the early days in Ladakh.

Farooq Ganderballi, the president of Voice for Peace and Justice (NGO) said that Kashmir has been the valley those saints and Sufis who preached peace and harmony all along their way while preaching Islam but it has been distorted by the evil forces to make this land a hell.

Now the people of Kashmir has realised the real meaning of Kashmir and the Impact of Sufiism in Extending brotherhood in the World which will be the future of the new Kashmir.

Tommorow on 07-01-2023 (Saturday) there shall be No Movement of Vehicular Movement through Zojila axis.*