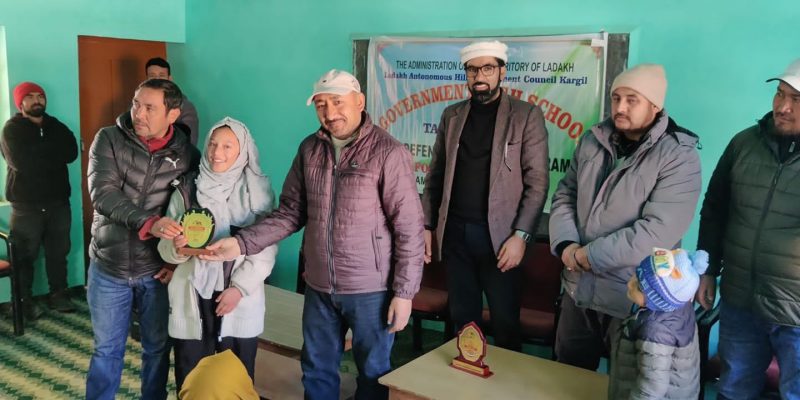 Condoled the Demise of Master Gurvinder Rakwal, the Coach of NH Balkhani

On this occasion Chief Technical Officer LTA And Headmaster GHS Budgam Nissar Hussain Balkhani was the Chief Guest and Anayat Ali Shotopa General Secretary LTA was the Guest of Honour.

Zaheer Abass Khan NIS Coach of Ladakh Taekwondo Association Condcuted the Camp for 7 days and all the girl students of the School Participated in the Camp and benefited from the camp.

The Students displayed the Self Defense Techniques and Kicking and Punching Techniques which they learned during the camp.

NH Balkhani remembering the contribution of Gurinder Rakwal his 1st Coach said that its because of Gurinder Sir that NH Balkhani was able to start the Taekwondo Classes in Kargil and which lead to the birth of some of the best sports person of UT Ladakh.

Balkhani on behalf of Ladakh Taekwondo Association paid condolence to the bereaved family and to all the taekwondo lovers of UT J&K and UT Ladakh.

He Paid his condolence to Master Atul Pangotra and J&K taekwondo Association for losing one of the supporter and best Taekwondo promoter of UT J&K.

While appreciating the efforts of the Chief Education Officer Kargil for impart-ing Self Defence Training to the Girl Students and making them capable enough to defend them-selves from any kind of situation, NH Balkahni said that such events not only incul-cate good behavior and morale among the students.

The Genral Secretary Ladakh Taekwondo Association Anayat Ali Shotopa appreciates this effort of the CEO Kargil and promised for any kind of technical help for continuing such trainings in future also.

He further added that the Association has more achievements through the girl child and we assure a better future and overall development of the players through imparting quality training and will continue the same in the future.

Later the guest, Presented mementoes to the School and the best Student during the Camp as a token of appreciation from Ladakh taekwondo Association.

In view of frost and slippery conditions of the road*, tomorrow subject to fair weather and road clearance, *only one way traffic from Srinagar towards Kargil* shall be allowed on Srinagar-Sonamarg-Gumri road.