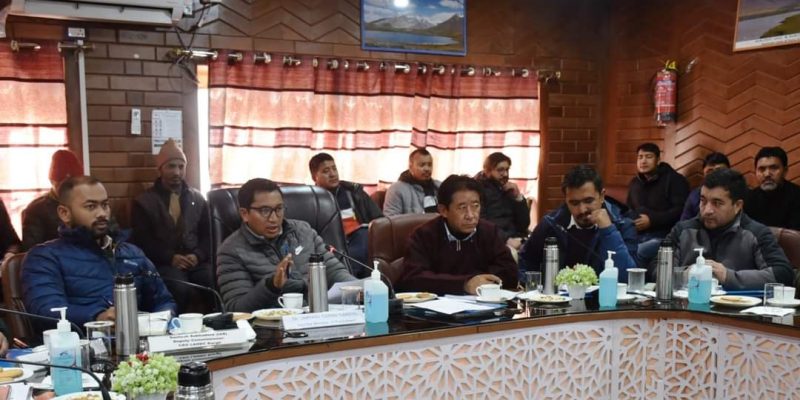 The MP inquired from the concerned officers in detail about the status of progress achieved so far under the flagship programs like CRF, PMGSY, JJM, MGNREGA, SBM U, PMAY-G, SBMG, NHM, Poshan Abhyan, PMFBY and other centrally sponsored schemes.

MP Namgyal was informed by the concerned officer that all High and Higher Secondary Schools were electrified and around 169 Primary and Middle schools have been provided electricity. He was also informed that in six schools, electrification work is undergoing and within a week all the works will be completed.

The concerned officer from the Industries and Commerce Department informed that through PMEGP scheme, around 162 applications were received for loan of which 158 cases were forwarded to the bank for sanction and among them 67 were sanctioned.

ACD Kargil Ghulam Muhammad informed that around 372 Self Help Groups in five blocks of the district are actively working through NRLM Scheme.

While highlighting the importance of SHGs in making women folks in rural area economically independent, MP Ladakh directed the ACD to furnish a detailed report of the increase in per capita income of the individual member working in SHGs at the earliest. 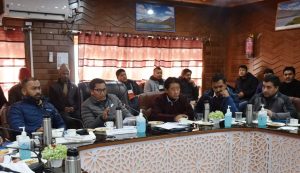 Reiterating the Prime Minister of India’s vision of Digital India and mobile connectivity to every nook and corner of the country, MP Namgyal informed the meeting that through Universal Service Obligation Fund (USOF), for providing connectivity to around 216 hamlets/villages which are still not covered under the scheme, 125 towers have been sanctioned. After survey, BSNL has identified 99 sites for coverage of these 216 uncovered villages/hamlets.

Stressing over the protection of labour rights, MP Ladakh directed the concerned officer from Labour Department to ensure that the labourers engaged in civil works, Administration, Army and BRO be registered on the E-SHRAM portal.

Further, MP Namgyal said all schools and other departments should be equipped with proper drinking water supply along with separate toilets for males and females. He directed all the concerned officers to construct the toilets till the next DISHA meeting is held.

He added that only on genuine medical grounds teachers can be relieved. The MP also advised to review the transfer policy of teachers and do the necessary rationalization.

Regarding the requests of villagers, he said the concern department, village-level sanitation committee, Sarpanchs and Panchs, should work in close coordination and try to resolve the issues at the earliest so that the works are not affected.