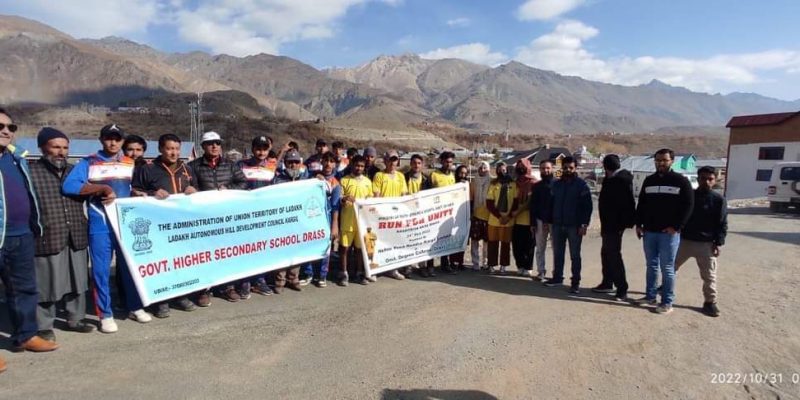 Thereafter run for unity was held from SDM Office Sankoo to Alamdar Chowk Sankoo and vice-versa in which all the officers/officials of the Sub Division participated.

In the end, the incharge SDM extended good wishes and thanked to all the participants for making the event successful.

In Drass, the celebration of Rashtriya Ekta Diwas was organized by Government Degree College Drass in collaboration with Nehru Yuva Kendra (NYK) Kargil.

Around 40 students from the college and Higher Secondary School Drass took part in the Run for Unity. The event was aimed spread the message of spirit of unity, integrity and harmony among people.

The run culminated with a pledge taking ceremony at GDC Drass in which students and faculty members pledged to preserve unity, integrity and security of the nation.

Similarly, the National Unity Day was also held at Shakar Chiktan. It was headed by incharge SDM Shakar Chiktan, Ghulam Rasool. He highlighted the importance of Rastriya Ekta Diwas Day to the participants.

After taking pledge, the Run for Unity was started from SDM Headquarter Chiktan to KGBV School Chiktan which was participated by officers and officials. In the end, the incharge SDM thanked to all the participants for attending the event.

Rashtriya Ekta Diwas is celebrated in India on 31 October. It was introduced by the Government of India in 2014. The day is celebrated to mark the birth anniversary of Sardar Vallabhbhai Patel who had a major role in the political integration of India.

Similarly, the Run for Unity was also celebrated in Zanskar Sub Division and the event was held at Govt. Higher Secondary School Padum where a pledge-taking ceremony was held

The incharge SDM took a pledge in presence of students, staff and other participants and highlighted the services of Sardar Vallabhbhai Patel for the nation.

Run for unity was also celebrated in more 20 locations in the subdivision organized by the administration in collaboration with Education Department, Youth Services and Sports Department, private educational institutes at different areas.