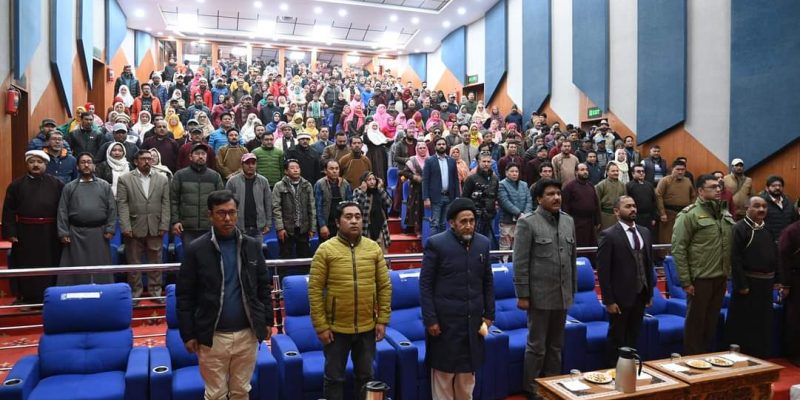 CEC Khan said with the formation of UT, the Union Government has increased the budget allocation for Ladakh which has enhanced the developmental activities.

He said the pace of developmental activities has taken to new heights which is evident. Khan said at present the total district budget allocated from the central government is 232 cr and 25 cr for the subsidy scheme.

The CEC appreciated the efforts of the district officers for timely carrying out all developmental works despite facing the challenges during the COVID 19 pandemic situation stating that almost 90 percent of the budget has been utilized during the year.

While highlighting the achievements over the years, Khan said in education sector, many revolutionary changes have been achieved which mainly includes development of smart classes, laboratory facilities in schools, development of playgrounds, libraries, infrastructural changes , buses for the schools etc.

The CEC said due to the funding from the central government, many developmental works have been achieved without hurdlers.

He said the renovation work of Boys’ Hostel in Jammu has been completed with full facilities and well-equipped library. Khan added that the new building of Girls’ Hostel in Jammu is almost at the completion stage.

The CEC said the construction of 300 bedded hospital at Kurbathang with all modern medical facilities is a landmark achievement for the district adding that CHCs and PHCs at community level are also equipped with modern facilities. 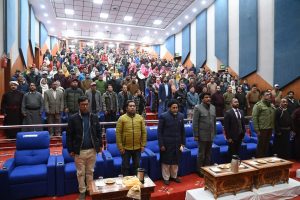 Khan said in Agriculture Sector, the district has seen tremendous changes in terms of cultivation of cash crops, vegetables and fruits. He said from the subsidy component LAHDC has distributed around 227 greenhouses for Ladakh which would ultimately develop self-sustainability for the farmer community.

Khan said similarly, many developmental works have been achieved by engineering wing of the district in terms of construction of roads and bridges which are the basic needs for the connectivity of the district.

The CEC said the pace in which work on Zojila tunnel is going is a big achievement and the work on the tunnel will be completed before the stipulated time which is 2026.

Regarding employment avenues for youth, Khan said recently DSSRB Kargil has issued a notification for 85 vacant non-gazetted posts adding that similar other notifications of district cadre posts are in pipeline and notification will be issued accordingly.

Khan requested the UT Administration to form recruitment rules for gazetted posts of Ladakh along with the provision of Ladakh Residence Certificate (LRC) to be mandated.

He also requested the UT Administration to develop air connectivity for Kargil district so that people can have easy access to outside Ladakh, especially during the winter season.

Meanwhile, the CEC thanked Ladakh Police for the recruitment of police personnel in Ladakh Police at such a short period of time.

Speaking on the occasion, Deputy Commissioner/ CEO, LAHDC, Kargil Santosh Sukhadeve on behalf of district administration congratulated all the district officers, HODs, employees on the occasion of UT Foundation Day.

DC Kargil said after the formation of UT Ladakh, Kargil has seen remarkable changes in developmental activities including Zojila tunnel, Kargil Zanskar Highway, construction of roads and bridges all over the district through different schemes.

The Deputy Commissioner said significant development has been achieved in health sector from community-level health facilities to the district level.

He said modern machinery including CT Scan, MRI machines and other medical facilities have been provided to the hospitals which has improve quality patient care services.

DC Kargil said along with the infrastructure development in hospitals, many staff nurses and doctors have also been appointed in the health department.

Similarly, in the education sector smart class rooms, digital libraries, science laboratories, and playgrounds have been developed for the students which have achieved positive outcomes.

DC Kargil also said from the subsidy scheme position holders in class 12th will be provided a laptop in a subsidized rate.

Celebrating the achievements achieved through JJM scheme, DC Kargil said before the formation of UT, Kargil had only 3 percent of water tap connections connected to house hold through JJM scheme. However, he said at present Kargil has covered almost 67 percent and expressed optimism that the district will achieve 100 percent before the set timeline.

DC Kargil said after the formation of UT liberal funding from the central Government has raised hope of the people in carrying out developmental activities.

DC Santosh said the district administration is working with dedication to meet the expectations of and to take Kargil in the developmental path to achieve new heights.

Stressing on students to dream like Abdul Kalam Azad, the DC Kargil said younger generation is an assent of the nation in carrying forward the legacy and make India number one in the world.

Earlier, colorful cultural performances were presented by different cultural groups, student solo performances, skit etc. that enthralled the audience. The program ended with the distribution of momentos to the participants in the event.