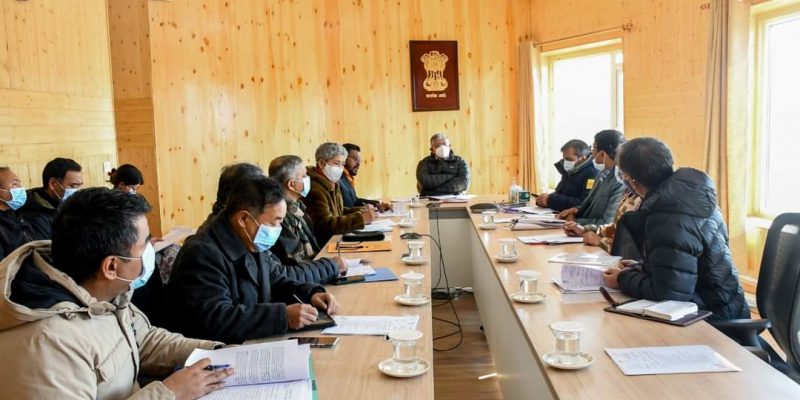 Preparations for Republic Day celebrations in full swing RepublicDay to be celebrated as per CAB guidelines; Advisor Ladakh reviews arrangements

Leh, Dec 28: Advisor Ladakh, UmangNarula chaired a meeting to discuss preparations for the upcoming Republic Day celebrations. The main events will be held at the Polo grounds, Leh, and the KhreeSultan Cho Stadium, Kargil.Commissioner/Secretary GAD

With the aim to promote – ek bharat shreshtha bharat- an initiative which aims at enhancing traditional/cultural bonding between different states of the country, Advisor Narula suggested inviting marching contingents and cultural troops from other States, in addition to the exchange of participation between the two districts – Leh and Kargil.

The Advisor also emphasized active participation of schools in march-past, cultural performances and stated that school bands must be built up for participation in such events. Further, Advisor Narula stated that the Republic Day celebrations must incorporate the ongoing Aazadi Ka Amrit Mohatsav celebrations and also highlight India’s Presidency of the G20, where Ladakh has been given the opportunity to host events on Indian Presidency’s G20 themes ‘Vasudhaiva Kutumbakam’ or ‘One Earth One FamilyOne Future’, in schools and colleges, amongst other events. 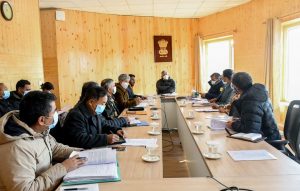 Special invitation to representatives of Persons with Disabilities (PwDs) was also stressed during the meeting, as the year 2022-23 was declared as the year of PwDs by the Hon’ble Lieutenant Governor of Ladakh. Advisor Narula gave directions for making necessary arrangements such as ramps wherever required and convenient seating arrangements for PwDs.

As part of the celebrations, prominent buildings viz the Raj Niwas, Civil Secretariat, round-a-bouts, etc shall be illuminated from 25th till 29th January.

Deliberations were also held in view of the surge in COVID-19 cases in its new variant the world over. In this regard, Advisor Narula urged to ensure all arrangements be made in accordance with CAB norms and directed the concerned departments to ensure thermal screening at entry points, social distancing, masking, provision of hand sanitization, pre-COVID tests of participants, etc.

Discussions were also held on the provision of a fully-equipped critical care ambulance, installation of mobile public toilets, etc.

It is pertinent to mention that all arrangements discussed above are subject to change depending on the COVID-19 scenario in the weeks ahead.