The training, which saw the participation of all the girl students, was imparted to them by Chief Technical Officer and 3rd Dan Black Blet Nissar Hussain Balkhani. 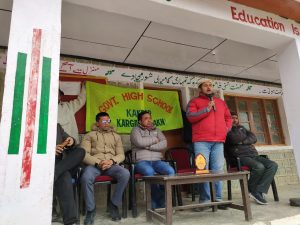 The trainers boosted morale and motivated the students to be prepare for any kind of situation. Students were trained in basic art of self-defence like use of physical force, which is permitted in certain cases as an answer to any untoward incident against the girl child.

Syed Mehraj Uddin Shah while talking on this occasion thanked the education Department for conducting such Self Defence Camp which is not only encouraging the Girls for their self defence but also provide them an opportunity to come towards a Game.

He said that Government is doing tremendous job for promotion of Sports in the UT and soon sports sector will see grand transformation.