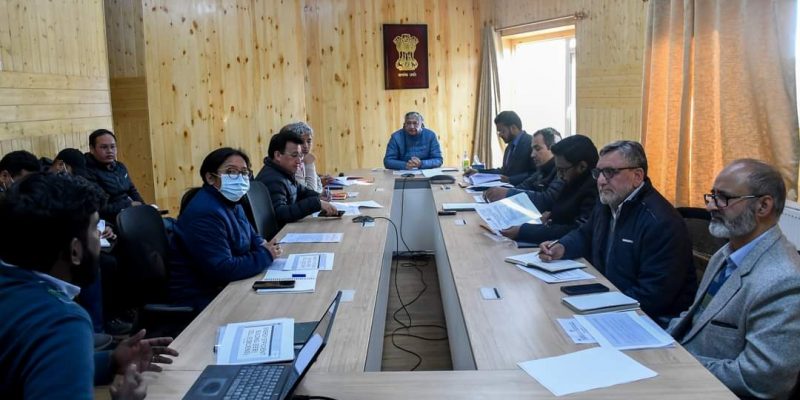 Leh, Oct 20: The meeting of the UT Level Committee for Implementation/ Enforcement of Energy Conservation Building Code (ECBC) and Eco-Niwas Samhita (ENS) in the Union Territory of Ladakh was held under the chairmanship of Advisor, Ladakh Umang Narula at Civil Secretariat, Leh.

At the outset, Secretary, Power Dept, Ravinder Kumar (Convenor) stated the terms of reference of ECBC viz. to promote energy efficiency standards through optimization of parameters in the various components and systems of the building in line with the provisions of these rules; to enhance the building performance and provide every support to make it an effective instrument of promoting energy conservation and energy efficiency in the commercial buildings or establishments; to promote capacity building of building professionals, developers and contractors to promote energy efficient designs of buildings in close co-ordination with jurisdictional authorities, among others.

Consultant Team Lead (Energy Efficient Building Cell-Ladakh), Jotham Prabhu gave a detailed presentation on ECBC and ENS outlining the aim and objectives; establishment of ECBC & Energy Efficient Building (EEB) cell for Ladakh; training programmes organized so far, etc. He stated that the purpose of the Energy Conservation Building Code is to provide minimum requirements for the energy-efficient design and construction of buildings. He spoke on the modification to ECBC Code for Ladakh as per the suggestions received and apprised the meeting that a draft for Ladakh-specific code is already under process and shall be ready soon. 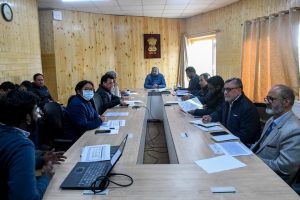 Advisor Narula suggested finalising the draft ECBC code within 3 weeks’ time in consultation with the PWD, ULB, and RDD departments. He stated that it is imperative to have a robust ECBC code as per the vision of a carbon-neutral Ladakh. Further, he instructed carrying out energy audits for existing buildings and consulting the local stakeholders in the building sector about the technologies used by them for heating.

Principal Secretary, Dr Pawan Kotwal said that the projects developed for Ladakh should not be just energy efficient but also cost-efficient.

Commissioner/Secretary, PWD, AK Sahu suggested maintaining a healthy balance when making plans for EEB as the heating arrangements should not block air circulation and reduce humidity.

Commissioner/ Secretary, Social Welfare Dept, Padma Angmo suggested conducting more research to understand the energy dynamics of the local customs followed in construction so that they can be adapted as modern sustainable building practices.