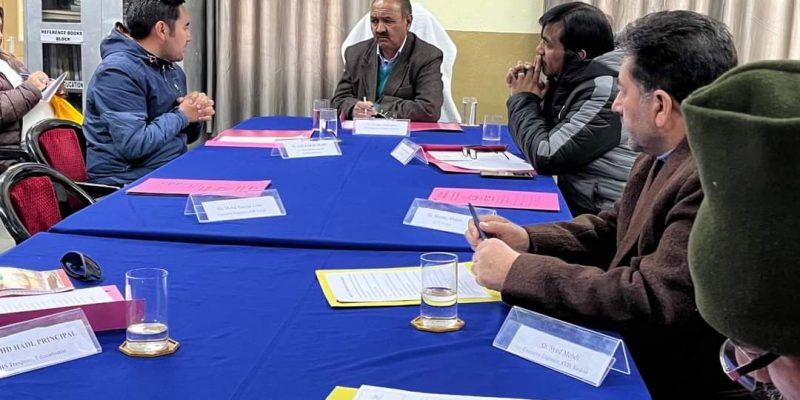 The second VMC meeting for the session 2022-23 was held today at KVK Kargil under the chairmanship of ADC Kargil, Ghulam Mohi-ud-din.

Most of the members of the VMC attended the meeting and gave their valuable inputs with regard to improving the Vidyalaya.

In the beginning of the meeting, incharge Principal, Gulzar Hussain apprised the members that the remedial action plan for slow bloomers of classes X & XII has been devised which will be carried out during the winter vacation from December 03 to December 12, 2022, and online classes will be carried out for rest of the 60 days of the winter vacation.

The ADC enquired about heating arrangements for students during the remedial classes, to which the incharge Principal responded that the heating system is in place for the comfort of students.

The incharge Principal also apprised the members regarding the ongoing PT3 exams for classes III to X, PB-1 which have already been held for classes X & XII and PB-2 which will commence from November 14, 2022.

He further informed the members that the construction work of staff quarters and installation of the heating system is in progress. 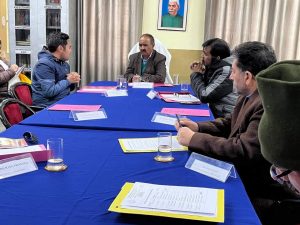 The incharge Principal also informed the members that solar-run power supply is helpful on the ground floor in case of power cuts but the same facility has not been extended to the first floor which hampers the works, including smart classes being conducted on the first floor.

He requested the members to address the issue for the smooth functioning of the Vidyalaya. The Nominee Chairman suggested that an estimated cost for the installation of a 50 KV solar plant be obtained from KREDA and then be submitted to the DC office for action to be initiated.

The incharge Principal informed the members that smart classes have not been installed in classes II –VIII for which he requested the members to address the issue to which the Nominee Chairman instructed that an estimated cost for installation of these 7 smart classes be sent to the DC office for further action.

The incharge Principal also apprised the members that it is customary for the Vidyalaya to condemn the damaged articles of various departments which is then auctioned, for which he sought permission of the members. He also informed the members that the water pipe has developed leakage at two points, which needs immediate attention.

He informed the members that two water connections have to be installed under JJM, one for the staff quarters and the other one for the Vidyalaya campus.

Regarding bother the issues the Nominee Chairman responded by saying that the matter would be taken up with the concerned authorities. The meeting ended with a vote of thanks.