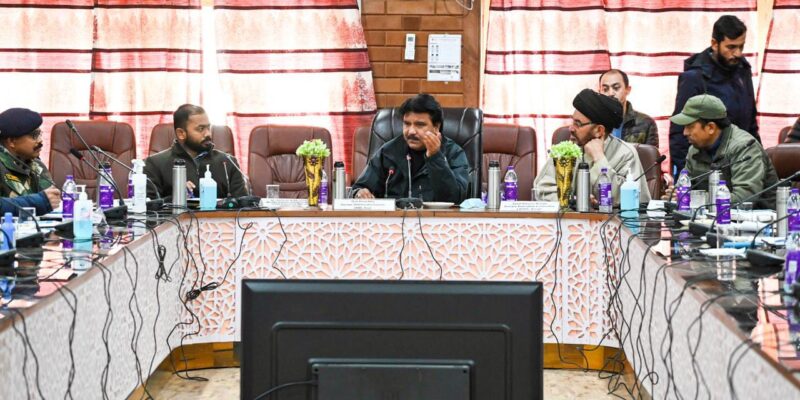 KARGIL, OCTOBER, 25, 2021: Chairman and Chief Executive Councilor, LAHDC, Kargil Feroz Ahmad Khan held a meeting to take stock of the damages caused due to the recent spell of snowfall and to discuss ways and measures for the restoration of essential services in the district at Conference Hall Baroo here today. 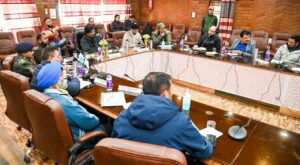 During the course of the meeting, DC Kargil  Santosh Sukhadeve while giving an overview of the damages caused due to the  untimely snowfall in the district said that horticulture, road connectivity and electricity have heavily affected and all the concerned departments have been directed to restore the essential services at the earliest possible.

The Deputy Commissioner Kargil informed that on Kargil Zanskar Highway NH-301 work is going in 7-8 packages where as on package 4, 5 and 6 more emphasis and major efforts needs to be done. He further said that restoration of electricity at all block and tehsil headquarters is being accorded priority and efforts are also being made to connect the link roads.

Regarding the assessment of damages, a joint team of Forest and Horticulture Department willl be framed, the Deputy Commissioner said.

The meeting was informed that the restoration of electricity in Kargil Town has been completed and by today all tehsil headquarters will be charged up while the peripheral and rural areas will connected within 5-6 days due to inaccessility and large scale damage caused by snowfall.It was further informed that approximately a loss of 82 lakhs to power infrastructure has been estimated which includes damage to electric poles, HT and LT lines and other  equipments.

CEC Feroz Khan directed the concerned officers the enhance the strength of field functionaries for restoration of electricity lines and assured that public respesentatives will also be requested to engage civil society in volunteering in the restoration works.

Meanwhile,  the meeting was informed that Kargil Srinagar Road NH-1 has been connected till Zero Point and from Sonamarg side, works executed by 120 RCC are expected to get completed by today evening. It was suggested that traffic should be regulated on one way basis for few days.

CEC Khan said that the Taxi Union Kargil should be directed not to allow any passenger vehicle from Srinagar to Sonamarg unless the road is not reconnected properly as it may create inconvenience to the passengers in case they get stranded at Sonamarg.

The CEC was further informed that around  300 passengers are presently stranded in the district who have been accomodated at temporary shelter homes and being provided proper lodging, food and medical facilities.

Regarding the Kargil Zanskar Highway, it was informed that the road from Kargil side has been cleared till Damsna, while from Zanskar side road has been connected till Chibra. The CEC directed that the pace of work should be increased and the Kargil-Zanskar Road including the Parkachik-Panikhar stretch should get connected at the earliest possibility.

Meanwhile, DC Santosh Sukhadeve directed the NHIDCL authorities to establish base camp at Chibra, Parkachik and Rangdum for better clearance and maintenance of the national highway.

As regards to the works being carried out by the Mechanical Division Kargil,  the meeting was informed that all the major link roads have been cleared and remaining will be connected at the earliest possibility.

Pertaining to the Horticulture Department, the CEC was informed that there has been no major destruction as per orchards are concerned but in upper reaches there has been major damage.