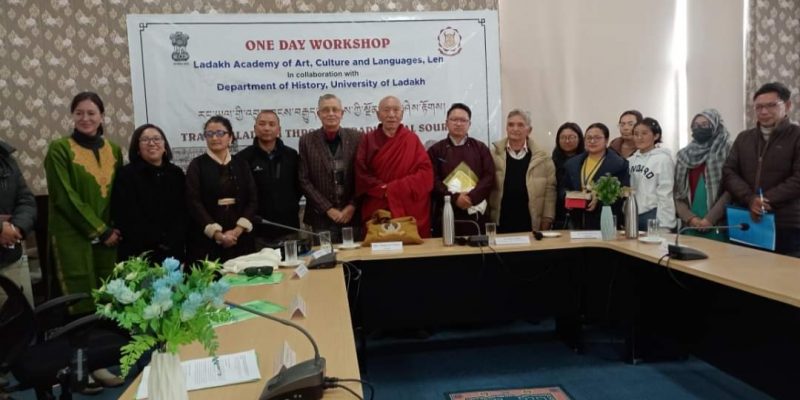 Leh, Oct 23: The Department of History, University of Ladakh in collaboration with the Ladakh Academy of Art, Culture and Languages (LAACL), Leh conducted a one-day workshop on the topic ‘Tracing Ladakh History through Traditional Sources’ at Taru Campus, UoL on October 22. The workshop aimed to familiarize students and faculty members with traditional historical sources and to identify the shortcomings present in such sources which, could be further explored for research.

In his welcome address, Editor LAACL Leh, Dr Thupstan Norboo, expressed his admiration for showing interest in the importance of the Ladakhi language and history. He stressed the importance of the Ladakhi language and the need to preserve and promote it for historical research. Highlighting the significance of primary materials, he stated that one of the major goals of the Culture Academy is to collaborate with monasteries of Ladakh and to hold seminars and thereby document all the primary materials available there.

Chief guest, EC Stanzin Chosphel, shared his joy and heartfelt thanks towards the Department of History, University of Ladakh, and Ladakh Academy of Art, Culture and Language, Leh for conducting this workshop. He talked about the importance of having a separate department at the University of Ladakh on Ladakhi culture or Language which could help promote and preserve our rich traditions and language. Therefore, he appealed to the students and faculties of the University to contribute their articles and research papers at all levels focusing on the history and culture of Ladakh. He further stressed upon conducting an outreach program by History Department in collaboration with Culture Academy, Leh, on the Boti language workshop and seminars to reshape Ladakh history. 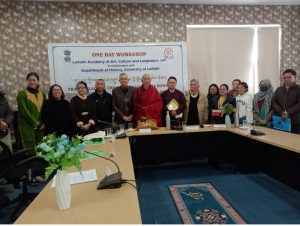 Rev Thupstan Paldan talked about his extensive study of Ladakhi history, specifically on Lostawa Rinchen Zangpo. He highlighted that, even though, there is much literature on Ladakh written by foreign scholars, it lacked authenticity because of the absence of their hold on the Ladakhi language. Therefore, it is pertinent to know the language to explore the history and culture. He also reflected upon Tibetan history and the contribution of Tibetan religious personalities in the development of Ladakhi history and culture.

In the end, Rev E S Gergan presented his grandfather’s two handwritten books to the Library of the University of Ladakh. He spoke on the topic ‘Historiographical Challenges for Ladakhi History’ and the contributions of Rev Yoseb Gergan’s ‘Ladakh Gyalrabs-Chimed Ster’ (Ladakh immortal treasure of Royal Heritage) and shared the limitations in the Ladakh historiography. Some of the constraints and challenges that he shared are the absence of primary sources in collated form, lack of documentation of different primary sources, absence of the role of women in the history of Ladakh, and the need to have a subaltern history and lastly, to internationalise the history of Ladakh.

The workshop was followed by a question-and-answer session. A final note of commentary was given by the Coordinator History Department, UoL, Dr Phunstog Angmo. She outlined the importance of organising such a workshop, particularly on King Singge Namgyal in the future to draw the different dimensions, and perspectives on the same.

Dr Nazia Jabeen presented the vote of thanks while Dr Rinchen Dolma moderated the whole session.