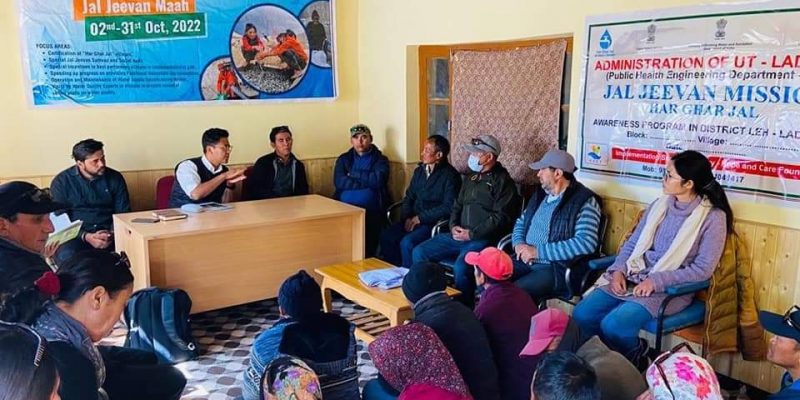 Leh, Oct 22: Jal Jeevan Mission is envisioned to provide safe and adequate drinking water through individual household tap connections to all households in rural India, which is also implemented in the UT of Ladakh. The Jal Jeevan Mission is based on a community approach to water. Also, as a part of the mission extensive Information, Education and Communication (IEC) activities are being carried out in all villages in the district.

In order to further strengthen the community partnership for the success of the mission, on the directions of Deputy Commissioner Leh, Shrikant Suse, District Water and Sanitation Mission, Leh and Public Health Engineering Department, Leh is celebrating ‘Jal Jeevan Maah’ across rural areas of the district from October 2nd to 31st.

During the Jal Jeevan Maah various activities are being carried out, including i) Special Jal Jeevan Samvad in every village where discussions are held on topics, such as a) Winter Management. Measures to be incorporated in the water supply scheme for its successful operation in winter, issues and problems that are expected to arise in the water supply scheme during winters, identification of problems and solutions or measures that can be adopted for its remediation like defrosting technique etc. Discussion on household connection maintenance during winters and explaining best possible measures that can be adopted to ensure adequate supply during winters without freezing.

b) Promoting community partnership: Role of Pani Samiti/community in Operation & Maintenance of JJM schemes/Discussion on O&M plan with community/ basic training on O&M, Social Audit of JJM schemes, Opening of bank accounts and providing training on preparation of accounts by Pani Samiti; c) Promoting water use efficiency and source strengthening: Awareness about the importance of clean tap water, its judicious use, promoting water use efficiency and grey water management, discussion on measures to adopted for source sustainability, cleanliness at the source. 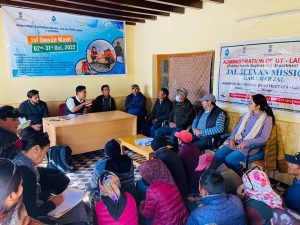 Speaking at the launch of Jal Jeevan Maah, the Secretary appealed to the public to actively participate in the public movement for safe drinking water and audit the JJM construction activities. Considering the winters, Comm/Secy Sahu urged the public to take tap connections inside the house to maintain above zero-degree temperatures and avoid freezing. He suggested that greenhouses, or covering construction above the tap connection point also help maintain water flow. He asked the villages to conserve water, reuse grey water and protect water sources to maintain a healthy supply of water.

So far, Jal Samvad were held in 75 villages of district Leh since the launch of JJM Maah. It is being attended by Senior officers of district administration who are given tasks for a cluster of villages as Prabhari Officer, Engineers of PHE department, Implementation Support Agency, concerned contractor, panchayat secretary who interacts with Sarpanch, members of Pani Samiti and community members and discussions are being held on aims envisaged for Jal Jeevan Mission.

After the launch of JJM Maah in the district, the coverage of JJM has reached 69 % which was 61% at the beginning. During JJM Maah, 1721 Functional House Tap Connections (FHTCs) have been added in the last 20 days.

JJM Maah had a positive impact on the ground in terms of ensuring community participation and ownership in the operations of the scheme in the villages. Mudh has become the first village in the district where due to the active participation of community members, water user charges are being collected monthly by the community which will be managed by Pani Samiti to manage the operation and maintenance of the water supply scheme.